We’ll I haven’t posted anything meaningful in a long while. Why break tradition? I’m not going to start now.

I do have to say that Jaime and I had a blast. We went with our friends Chad Jones and Charles Jenkins. Charles is an aspiring writer and spent most of his time at the writer’s tracks. Chad is a fanboy that spent most of his time in panels for Stargate, True Blood and other shows. He also wandered around and took lots of pictures – as did we.

I wasn’t feeling too well and Jaime was just coming down with a cold herself. When we weren’t out meandering the halls of the five host hotels, we were in our room sleeping because we were so exhausted. However, at night we managed to get up, don a costume and join the non-stop party that is Dragon*Con. 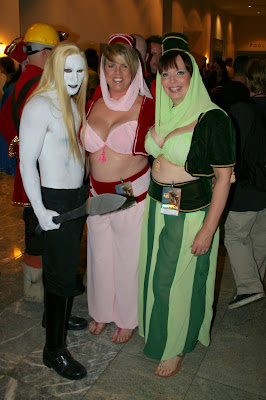 Prior to The Con this year, Jaime and I had decided to go in costume. As Barbara Eden was one of the featured guests for The Con, it came to our minds that we would make a great Jeannie duo. I, as Jeannie, because I was blonde, and Jaime as Evil Jeannie, because she was brunette. For my very first attempt at sewing, and Jaime’s first attempt at other-than-curtains, the result was fairly good.

In addition, we were also part of a Guinness Book World Record Attempt: The Most Star Trek Characters in Costume. Guinness was on hand to tally the results and pending verification, our group set a world record of 571 persons in costume in one room. 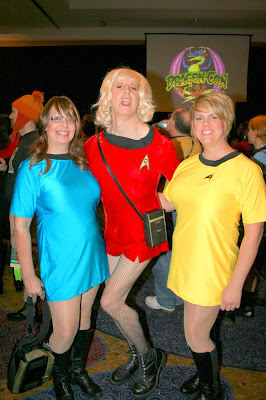